As we bluster into the autumn season, Laura and I have found the falling leaves and chilly weather inspiring.  As the prime summer camping season winds down, it’s prime-time for an Airstream Improvement Project!  Camping trailers are the perfect outlet for the consummate DIYers.  Hmmm… now where to begin?

With all due respect to the interior designers at Airstream, there are some aspects that just aren’t our style.  We all love the cozy atmosphere of our respective Glamper-campers, but there’s always room to personalize.  While there are plenty of projects on our “to-do” list, we finally pulled the trigger on replacing the dividers.

Our Airstream came with opaque, plexiglass dividers.  While they definitely matched the color scheme, it just made the interior feel… well, frosty.  (I suppose frosted plexiglass will do that.)  To bring out some warmth, we chose a birch plywood.  It looks pretty good, finishes nicely, and most importantly, is really super cheap.  Sweet!

You can remove the dividers with a simple turn of the screwdriver.  The brackets that hold them in are pre-molded for the super-skinny plexiglass.  So unless you want to buy super-skinny plywood, you’ll have to make new ones (not as hard as it sounds).

Step 2:  Cut out your new dividers!

There are a couple of ways to tackle this one…

Option 2A)  Brain-Hurting-Curvy-Mathy-Stuff:  As far as I’m concerned this is the hard way, but it will emulate the exact curve of your Airstream.  You can build an “outside the curve” template that takes into account the distance between your router guide and the blade.  It involves “math” and “angles.”  If you are good with those things, then good on ya!  Gold star, mathlete!  I suck at math, so I avoided this option.

Option 2B)  Mad Awesome Tools:  There are some awesome tools designed to reproduce exact templates.  You can attach a Rockler “duplicating pin” to a standing jigsaw, and it’ll act as a guide for whatever template you attach to your wood.  Neat!  Unfortunately, I have neither a duplicating pin nor a jigsaw.  Also, I’m poor, so I avoided this one, too.

Rockler Duplicating Pin. Super schnazzy, but not an option for those of us who are… ahem… “disadvantaged” in the tool department…

Option 2C)  Wing It:  If you’ve got a surgeon’s hands, you can try and free-hand it.  Trace your curve, then go crazy with a router or jigsaw.  It’s a bold strategy, Cotton!

Option 2D)  Good-Enough-for-Government-Glamping:  In the end, I picked the poor-man’s/lazy-man’s solution.  I used a handheld router, and used the existing plexiglass divider as a guide.  It creates a slightly different curve than the original, but the end result is less than an inch difference.  We found the difference to be barely recognizable, and generally follows the curve of the camper.  Voilà!  That’ll do, pig. 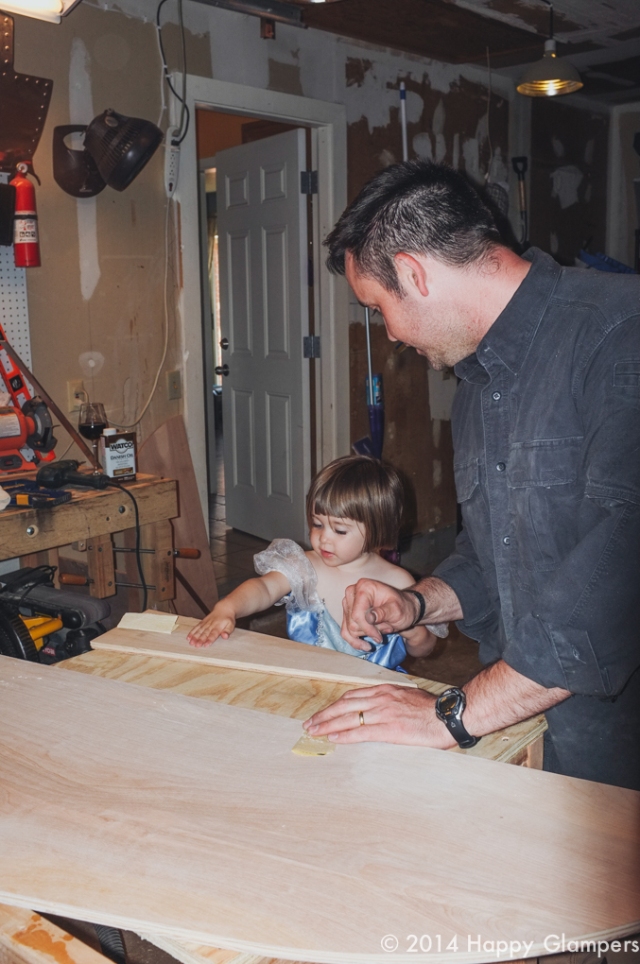 At this point, you can make some personal style choices.  We chose a nice natural finish that would bring out some of the beauty of the wood.  Whatever you chose, always make sure to sand down to a fine, smooth finish.  Luckily, the wood is cheap enough that you can make a few mistakes without breaking the bank.

Like I mentioned earlier, if you chose a thicker-than-plexiglass option, you’ll need to make new brackets.  It’s easier than it sounds!  Simply go to the hardware store, and buy some 2-inch flat aluminum bar.  (recommend 1/4″ thickness or less)  Cut it into sections, bend into 90° angles, and drill the holes.  You can finish or paint them if you want.  I just chose to lightly touch them with an orbital sander loaded with fine-grit sandpaper.  I found this made a nice “brushed aluminum” look.

Now that you’ve got a sturdy, manly divider instead of flimsy plexiglass, you can mount/hang things on it if you want!  We relocated our flat-screen to the bedroom area, but you could also use this option to install a second one if you were so inclined.  I was surprised at how sturdy it was… and how well it fit.  Who knew?! 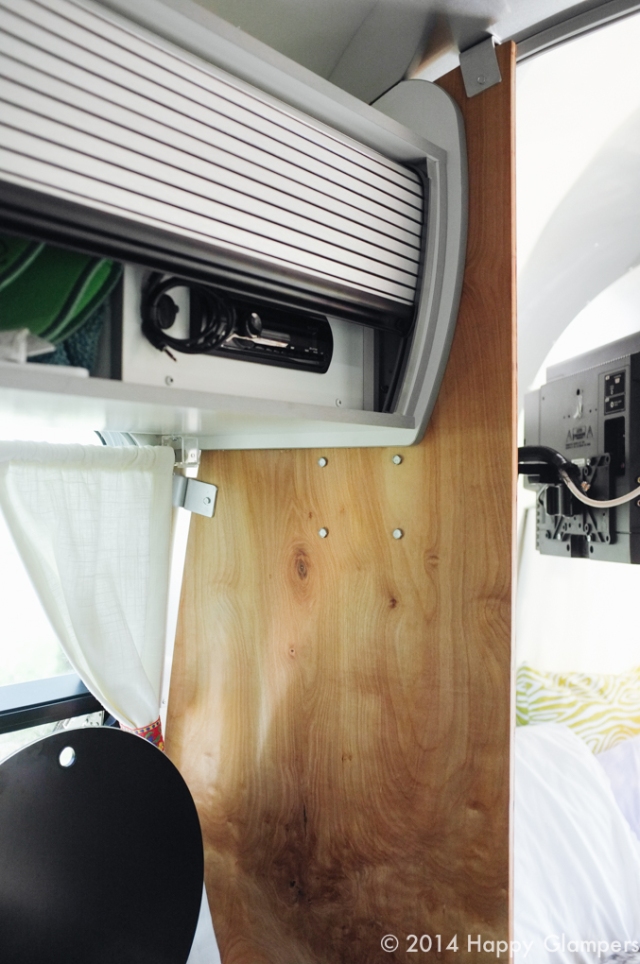 Step 6:  Bathe in your Glorious Self-Helpitude

You have created awesomeness!  Consume a mighty ale to honor the Gods of Independence!

We have plenty of other improvement projects on the horizon.  What other changes have you made?  We’d love to see what our fellow Glampers are doing. Share below!